Skip to content
Posted on June 4, 2018May 19, 2020 by grindhousepress Tagged Books, c.v. hunt, cockblock, horror
Here is a review of C.V. Hunt’s Cockblock written by Anton Cancre. It will be published through Grindhouse Press June 25th, 2018. Pre-orders of the Kindle version can be had here: https://www.amazon.com/Cockblock-C-V-Hunt-ebook/dp/B07BV4NB4X 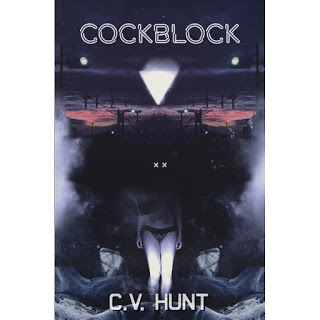 Holy fuck, kiddos, kiddettes and kiddareenies, does Papa Cancre has a doozy in store for you today. Strap in.
So, Cockblock (Oh. My. God. Is this the best title, or what?- I’m pretty sure Grindhouse mentioned doing buttons and I want one so bad): All of the men in the world have suddenly devolved to spewing idiotic pick up lines and trying to fuck everything around them. The only thing that can stop them is a swift chop to the old danglies. And here we have Sonya and Callie trying to wade through this sea of angry cocks to some place of safety. Like Jack Ketchum’s Ladies’ Night, but with dicks.
Yeah, I get that the synopsis of Fuck Zombies vs. Lesbians sounds like the stupidest thing ever and it kinda is. What makes this work, though, is the delivery. Essentially, this is a down and dirty Hardcore (or Extreme, or whatever label you want for really fucked up shit) romp filled to the brim with sex and gore and quite creative violence. It’s punchy and moves like a freight train on greased tracks. Seriously, I finished it in two days and I am a notoriously slow reader.
Nothing wrong with that whatsoever, buckaroos.
It also gets right what so many other purveyors of the genre get wrong. The characters are full and flawed and real as all hell. The events that they go through are tense and harrowing and don’t ever feel cheap. There were several times where I had to stop because I was getting either too choked up or too freaked out and needed to cool off a bit. To pull off this much honesty and impact in such little space is impressive, and to do so with such a silly premise is goddam amazing.
Now we get to the uncomfortable part. This book deals a lot with rape. It is neither pleasant nor fun in that regard. I wouldn’t feel comfortable recommending this to anyone who has lived through it or is triggered by it in any way. However, this is yet another thing Hunt does well while so many others fuck it up. Rape is not treated lightly here. It isn’t used as a cheap impetus for revenge. It doesn’t become the sole motivation or life-determining event for any of the characters. Every time it comes up (and, again, it comes up a lot in these pages), it is treated with import and terror and honesty. I did not particularly enjoy these portions of the book, but I appreciated how the subject was dealt with here.
In the end, this is a book about rape culture. It is about what it does to both women and men. It can be looked at as a fever dream version of the world women have to navigate daily and it is goddam horrific.
It’s also fucking wondrous. Picture the violent insanity of Ed Lee tempered with the humanity of Jack Ketchum, all set on fire by the raw rage of Brian Keene at his pissed-offedness, and you have a good start. And that ending. Holy shit, that ending. The best/worst/ohmychrist-est take on “grab her by the pussy” you are likely to experience.
Just buy the damn book. Either hug me or punch me for it later.