Now live wherever you purchase ebooks or paperbacks! Remember to screenshot your receipt after purchase (paperback, ebook, or pre-order) and email it along with your name and mailing address with giveaway in the subject line to gindhousepress (at) yahoo (dot) com by February 28th to enter for your chance to win a $10 Amazon gift card. 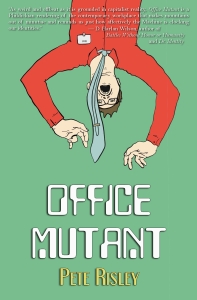 A nervous, insecure file clerk named Tim Plummet awakens from vague nightmares into a surreal world that to him seems quite mundane. Arriving at his workplace, he enters an artificial but drab office milieu generated by a mysterious device called the Space Saver. Among his co-workers is a gleeful assistant director named Mr. Drivel, who possesses the extraordinary power to manipulate reality within that milieu and seeks to make Tim his protégé. At home, Tim himself has an oddly heightened ability to dominate his wife Betty and their children, despite Betty’s persistent complaints about a bill they receive in the mail from a company called Bliss Assurance. Tim insists on paying the bill, while he admits he doesn’t know what services are being provided. Betty schemes to rebel against Tim’s control, and events at both home and work become increasingly bizarre until Tim experiences a revelation…