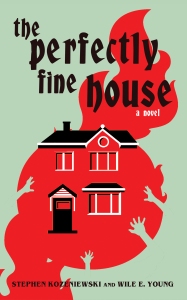 In an alternate reality where ghosts are as commonplace as the weather, the most terrifying thing imaginable is a house not being haunted.

Donna Fitzpatrick runs a surrogacy agency, where ghosts can briefly possess volunteers in order to enjoy carnal pleasures. She’s also working herself into an early grave. But that’s no big deal because death is no worse than puberty. That’s particularly evident in Donna’s twin, Kyle, a self-absorbed roustabout who spends most of his time high on sage. Kyle’s been in arrested development since his motorcycle accident fifteen years ago.

When Donna has a panic attack, Kyle insists she take a vacation at an abandoned mansion. There’s just one small problem: there isn’t a single ghost in Jackson Manor. And while an unhaunted house seems no worse than an oddity at first, soon ghosts go missing, natural disasters consume entire cities, and every afterlife on earth is threatened by the terrible secret behind . . .